HONG KONG, Dec. 23, 2020 – Co-organized by China Daily, University of International Business and Economics, Shanghai International Studies University and Asia News Network, a panel discussion session themed “COVID-19 and Impacts on the Media” was held virtually on
Wednesday, December 23, 2020. Media leaders and experts joined the event online and discussed how reporting strategies and operations of the media have changed amid the COVID-19 pandemic. 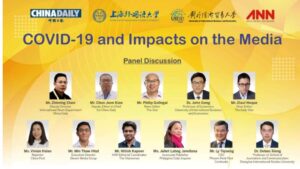 Mr. Zhou Shuchun, Standing Committee member of the CPPCC National Committee and Publisher and Editor-in-Chief of China Daily, delivered the welcoming remarks. He said Chinese media colleagues have braved hardship and danger to record heart warming battles to tell the story of China’s fight against the pandemic, which boosted the morale of frontline warriors.

Later, Dr. John Gong, Professor of Economics, University of International Business and Economics; and Dr. Debao Xiang, Professor of School of Journalism and Communication, Shanghai International Studies University; shared their insights on the topic.
John Gong pointed out that the model of the media is changing. “Now people are more and more receiving messages through relays of information. What this difference makes is that, in order for the message to be relayed, there is a tendency for the message to go extreme. You’re moving into a world where you have those short snackable video clips kinds of product that people tend to use or like to watch. There’s no difference between fact and opinion-editorial. It is now even more difficult for readers to get information that is objective, fact-based.
Traditional media need to tighten their seatbelt and stick to what they are doing. If you have to sacrifice your journalistic standard for traffic volume, this is deplorable. The government needs to take actions. I think we have quite a strong government here in China that looks after this disinformation and misinformation,” he said.Debao Xiang pointed out that the pandemic’s impact on the industry is both negative and positive. “There is a decrease in the average media budget due to the coronavirus. Around 35,000 journalists in the US have been laid off and faced pay cuts amid the pandemic. This is not only influenced by COVID-19 but also the impact of the new technologies. But audience trust for journalists has increased …this is a good phenomenon for the journalism industry,” he said. 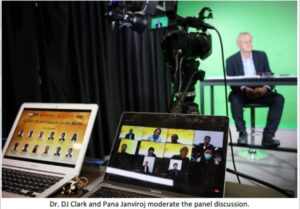 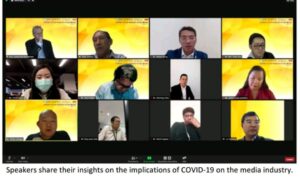