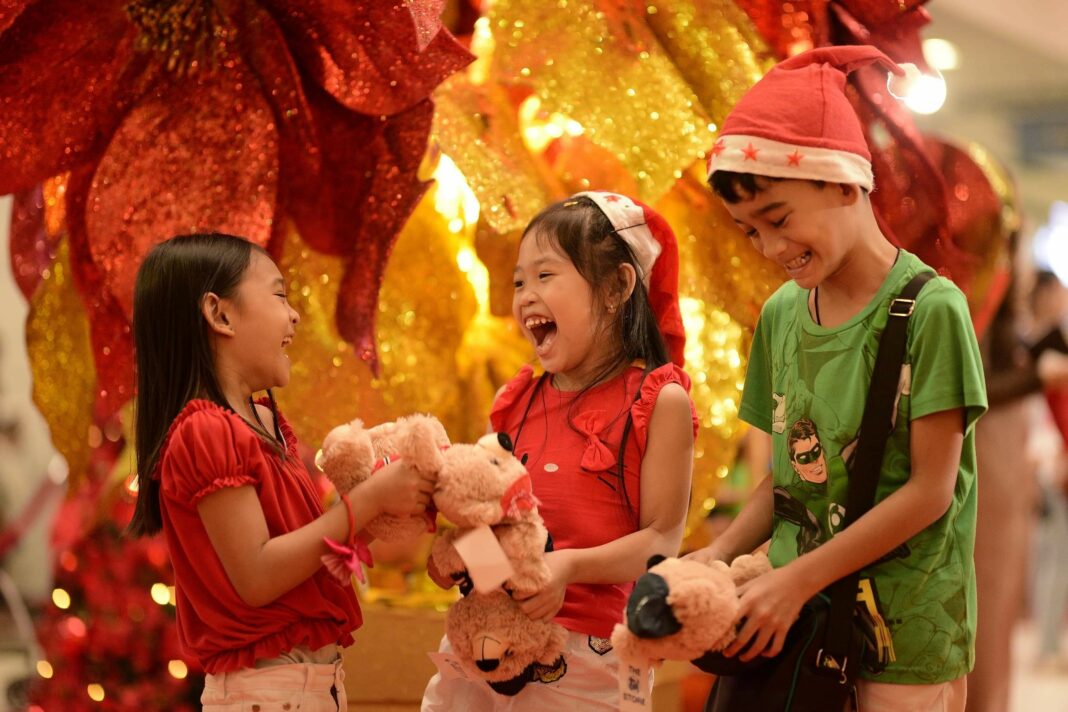 Along with this year’s theme, ‘Sparkling Christmas’, SM City San Jose del Monte set up a 30 feet high Christmas tree filled up with red and gold decorations. Around it are four 6-foot tall Christmas trees, four 8-foot tall Pointsettia trees, giant Christmas balls, and giant gifts. There are also two golden reindeers, two golden benches, a golden pathway above the red carpet, a golden arc, and two golden bells at both ends of the centerpiece.

SM City San Jose del Monte Mall Manager Mr. Jose Mari Emmanuel H. Correa thanks every shoppers for coming and celebrating Christmas in SM. “Christmas is surely the brightest and happiest time of the year, and we thank you for creating unforgettable memories with your family and loves ones at SM” he shares.

The afternoon was filled with entertainment that started by San Jose del Monte’s very own Sining Tanglawan, a group of performers in the city, followed by performances from artists Ataska Mercado and Ken Chan.

Mall goers especially the kids were also treated to an enchanting magical show from JB Dela Cruz. The audience was left amazed as Dela Cruz performed jaw dropping tricks, as he even invited some of the kids and engaged them in his magic.

Mr. Correa led the ringing of the golden bell that signified the start of countdown to the ceremonial lighting of the 30-foot Christmas tree and the whole Christmas centerpiece. The traditional lighting was complemented with red and gold confetti blizzard, cold fireworks, and playing of the new SM Christmas jingle, ‘SM Mallidays.’ Because Christmas will not be completed without sharing and gift giving, ‘SM Bears of Joy’ also highlighted during the launch. It is an annual charity project in partnership with Toy Kingdom that allows shoppers to share their blessings to the underprivileged kids through the simple act of bear giving. Shoppers can buy a pair of bear for only P200.00 wherein one goes for donation and one is for keep.

In relation to the ‘Bears of Joy’, San Joseño kids also had the chance to meet, greet, and take photos with Santa Claus. The legendary generous man started to spread love as he led the gift-giving of bears to the invited kids. Bears that were shared were the initial collection from the donation from the equally generous customers. Remaining and to be collected bears will be donated to a charity. The program will run until December 25.

Aside from the Christmas centerpiece, SM City San Jose del Monte is also bursting with red and gold Christmas decorations such as illuminating and glittery Christmas balls, poinsettia flowers, and thousands of LED Christmas lights. 8-foot tall Christmas trees are also very visible around the mall from entrances to escalators and even in some stores.

SM City San Jose del Monte filled its event area with lots of red and gold Christmas decorations. Photo shows children are having fun with the confetti drop in front of the 30-foot Christmas tree, giant Christmas balls and gifts.

Santa Claus is having fun with San Joseño kids as he started to spread love as he led the gift-giving of ‘Bears of Joy.’

Children are seen playing and having fun after receiving bears of love from the ‘Bears of Joy project of SM donated by the generous shoppers.