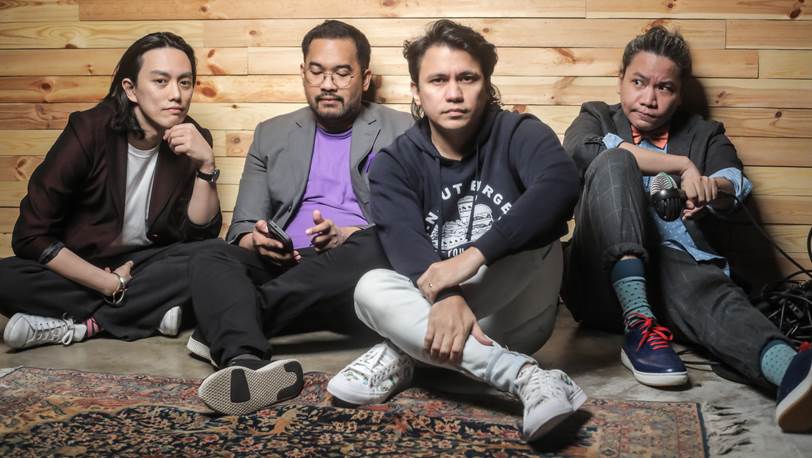 Aside from churning out modern rock classics that carve a special place in our collective consciousness, Sponge Cola has always been adept in capturing the divine feeling of romantic high, the cautionary tale that comes after, and the journey caught in between the respective timelines.
The “Siguro Nga” hitmakers have mastered the art of helming the soundtrack of our lives with universal appeal, and this time, they are putting a uniquely captivating but relatable spin on the ‘love song’ format with the release of their new single “Labis-labis” via Sony Music Philippines.
According to guitarist Erwin “Armo” Armovit, their latest single is all about the “overflowing, overwhelming joy of being fully yourself with someone,” and was written from a sincere, heartwarming place. “Love is an inexhaustible source of inspiration that takes countless forms; and songs are stories set to music. Every person experiences love differently, but every person experiences love.”
Having redefined stories about romance and defeat from varying lenses, Sponge Cola refuses to pin down their songwriting sensibilities with a one-dimensional approach. As bassist Gosh Dilay puts it, “With love songs, there is always a new angle/new dimension to explore.”
True to its core, “Labis-labis” works because beyond its gloriously cinematic chorus and inescapable verses, the song is specifically made to describe a moment—fleeting, short, but resonant to the experiences of the people around us, most especially those that chose to accept and reciprocate love in various shapes and forms, regardless of its possible consequences. Dilay perfectly sums up this emotional retreat into words, “it’s the gleeful feeling of excitement upon seeing someone you love, after being away for so long. Or even just after a brief period. That’s the magic of the song.”
Recording “Labis-labis” turned out to be fun and exciting for Sponge Cola, even if it has undergone the most transformations out of any songs that they’ve previously worked on. “The song started as a mid-tempo, all acoustic ballad and continuously evolved into its current state as we played it together as a band and incorporated modern arrangement ideas from our producer, Joey Santos.” Armovit said, “We had to play the song repeatedly and listen to really figure out what it needed and where it wanted to go.”
The track brought their funk on, albeit in a subtle way, while retaining the unapologetic pop smarts infused in the arrangement. The arrangements also took a more interesting direction music-wise, making it little more rocking and special.
Sponge Cola’s “Labis-labis” is out now on all digital platforms worldwide via Sony Music Philippines.